Autonomous transportation: In an ever-changing market, Navya continues its growth within the United States and North America 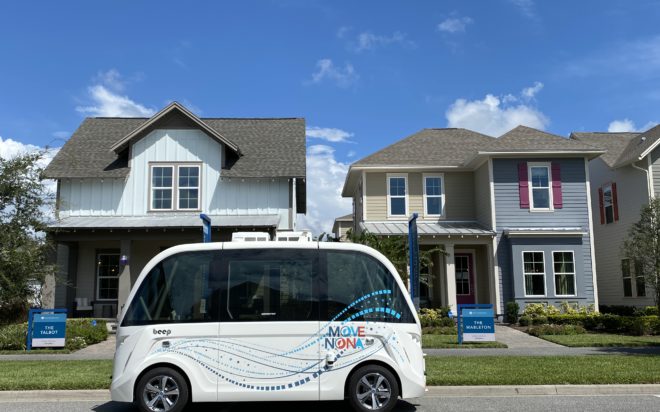 Villeurbanne, France, June 22nd 2022 – 07:30 am CEST – NAVYA (FR0013018041- Navya), an autonomous mobility systems leader, continues to push for market leadership within the United States, building key partnerships that will scale mobility as a service within the North American market that is ever more autonomous, connected, inclusive and sustainable.

The United States autonomous vehicle market is expected to grow significantly within the next eight to ten years due to rapid advances in technology, increasing market demand and successful test deployments. Since 2019, Navya and Beep, Inc. have been at the forefront of autonomous shuttle projects in the US, transporting tens of thousands of travelers on public and private roads across the country and expanding the safe testing of autonomous platforms.

The Beep and Navya partnership has also successfully tested and deployed routes in locations including Peoria, Arizona; Tampa, Florida; and Pinellas County, Florida. In 2020, in partnership with Jacksonville Transportation Authority, Beep used Navya shuttles to transport COVID test samples on the Mayo Clinic campus in Jacksonville, Florida without a safety attendant on board, achieving true Level 4 autonomy during the four-month project.

NAVYA’s self-driving shuttles, operated by its partner Keolis, are providing a new mobility option for the visitors to Las Vegas. Not only does the project provide transportation in the vibrant downtown area of this extraordinary city, it plans to offer passengers a new autonomous mobility experience, while at the same time collecting feedback.

IN the summer of 2018, Navya in partnership with Keolis, operated a Navya shuttle for 12 months in the city of Candiac, Canada. The Navya shuttle operated in mixed traffic, integrating autonomous shuttles into shared transportation solutions, in addition to complementing the existing transport offer.  For 8 months the service was offered free to the residents of Candiac, providing a two-km route between the exo park-and-ride lot and the bus terminal with many stops along the way. During the 4 winter months, a research and development project was conducted to test the shuttle in Québec wintry weather conditions without passengers on board. Lessons learned from this deployment have helped shape future designs of heating and cooling systems on Navya shuttles.

Late last year, in the summer of 2021, Navya and operator Keolis, deployed 2 shuttles near the Montreal city center. These 2 shuttles ran on a 30-minute loop along Saint-Hubert and Saint-Andre streets while making seven stops. It was the Canadian Minister of Transportation, Sustainable Mobility and Electrification who inaugurated this first self-driving shuttle service. The demonstration was split into 2 phases, the first phase began in 2021 and the goal is to drive as many kilometers as possible and do testing while gauging the acceptance of the shuttle on the road. The second phase will begin in summer of 2022 and the goal is to transport the maximum number of people possible with schedules adapted according to needs of the city.

In May 2019, Navya was awarded the Planet M Mobility Grant to deploy an industry leading, autonomous, accessible paratransit shuttle for servicing an at-risk population in Detroit, Michigan. This deployment aimed to enhance accessibility for residents of two communities, Brush Park Manor Senior Housing and Brewster Homes, using a self-driving shuttle featuring an ADA compliant wheelchair ramp manufactured by BraunAbility. With these integrations, the service solved the problem many residents of each community face attempting to secure reliable transportation to and from doctor’s appointments and other essential or critical needs. Whether the rides fulfilled a specific transportation need or simply satisfied a curiosity for the technology, this project served its purpose well and showed that there is a specific and sustainable reason to explore AV transportation options in these communities.

In September 2019, Navya and the Texas A&M University deployed an autonomous shuttle on the campus of the university for a 3-month demonstration to identify the potential use of autonomous transit services, including lower-speed shuttles and buses, to improve mobility, connectivity, and safety within the campus streets.

The first ever Navya shuttles within the USA were deployed at the University of Michigan in 2016. The Mcity shuttle program deployed 2 shuttles on the north campus of UofM, researching how passengers, pedestrians, bicyclists, and other drivers interacted with the shuttle to gauge consumer acceptance of the technology. Exterior cameras captured the reaction and behavior of other road users, including other vehicles, bicyclists, and pedestrians. Interior cameras recorded the reactions of riders inside the shuttle. This included the use of video and audio recordings, and photographs from the videos. Mcity also monitored ridership and usage patterns, and surveyed users about their experience. The data gathered will help researchers understand user trust over time, as well as how to design safer vehicles and how to operate them more efficiently.

In 2020, at the end of the University of Michigan deployment, one of the MCity shuttles were donated to the Henry Ford Museum and is a part of their growing collection of vehicles that are changing automotive history. Today, the remaining MCity shuttle is still in operation on the grounds of the MCity Test Facility. This test facility is the world’s first purpose-built proving ground for testing the performance and safety of connected and automated technologies under controlled and realistic conditions. The Navya shuttle is available for tours of the facility as well as testing of Navya software.

“Since coming to the U.S. in Saline in 2017, Navya has been able to deploy autonomous shuttles in multiple use cases around the United States and in Canada. Working with top operators like Beep and Keolis as well as our partnerships with universities, hospitals, cities and tourist destinations we are successfully demonstrating the added value of shared, safe, sustainable transportation increasing mobility for all. The US and North America as a whole constitute an exceptional area for the future of autonomous mobility, where Navya is particularly well established and ready to work hand-in-hand on all the developments and projects of this continent which has always been an innovator and a pioneer.”

NAVYA is a leading French company that specializes in the supply of autonomous mobility systems and related services. It was founded in 2014 and has a total of 280 employees in France (Paris and Lyon), in the United States (Michigan) and in Singapore. NAVYA’s aim is to become the benchmark provider of level 4 autonomous mobility systems for the transportation of people and goods. The company achieved a world first when it launched its Autonom® Shuttle for passengers in 2015. Since that year and up until 31 December 2021, more than 200 vehicles were sold in 25 countries. In 2021 Navya launched its industry equivalent, the Autonom® Tract, a tractor for the transportation of goods. The company is firmly and actively committed to CSR, and it was awarded the ISO 9001 certification in September 2021. The Valeo and Keolis groups count among Navya’s historical shareholders.
NAVYA is listed on the Euronext regulated market in Paris (ISIN code: FR0013018041- Navya).
For further information, visit our website: www.navya.tech