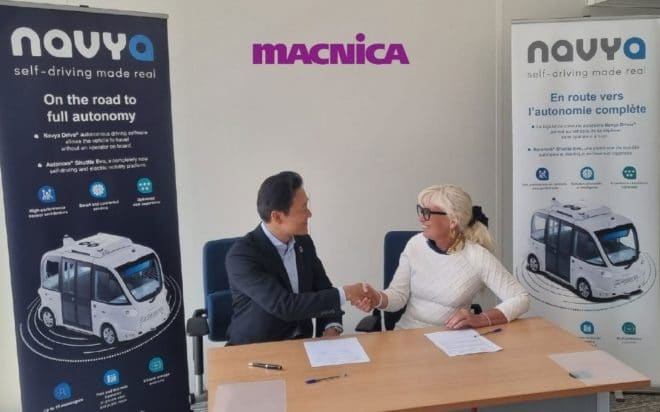 Villeurbanne, France, June 30th 2022 – 7:30 CEST – NAVYA (FR0013018041- Navya), an autonomous mobility systems leader, has announced the sale of two new ARMA autonomous shuttles to its partner Macnica and the signing of a memorandum of understanding for the sale of its Navya next generation platforms after their launch on the market.

Macnica is an international electronics and IT solutions group with an annual turnover of some $5.2 billion and a global headcount of + 3,900 employees. The company has been Navya’s distributor in Japan since the beginning of 2020 and has already been charged with the deployment and maintenance of Navya’s shuttles for end customers in Japan during the many trials they have undergone on Japanese circuits, in collaboration with Boldly, a SoftBank owned subsidiary specializing in autonomous mobility.

The new order confirms the growing interest in Japan for autonomous vehicles and is at the same time a further attestation of Macnica’s confidence in Navya’s technologies and services.

Macnica has already taken on board the dominant place autonomous shuttles will occupy in Japan’s mobility network in the years to come and is now signing into Navya’s step-by-step business model by positioning itself as a future large-scale buyer of Navya next generation platform.

In this way, Macnica has set the seal on its intention to be part of the success of Navya’s future NextGen platforms by signing a memorandum of understanding for the purchase of more than a hundred units in the years immediately following their entry onto the market.

“Navya who has abundant achievements and excellent technology in global is an important partner for us under the activities toward level4 autonomous driving in the Japanese market. By deploying more than 100 Navya New Platform shuttles in the expanding autonomous driving market in the coming years, we will provide them in combination with various technologies owned by Macnica. We believe that we can not only contribute to Japan’s transportation issues, but also provide new value for transportation. In addition to the New Platform, we have just placed additional orders of two ARMA shuttles to provide support according to the customer’s purpose to expand the number of users.”

“Navya has carved out a place for its shuttles in Japan. Over the years they have become the mobility of choice for their users, because they offer a useful and practical answer to their everyday transportation needs. The new order from Manica, Inc. is the result of strong backing from the users, who see them as an innovative means of transport that has integrated smoothly into the traditional transportation networks, and the result of their success in making themselves an indispensable in facilitating traffic flow and moving large numbers of people. Being able to provide an efficient, sustainable and eco-friendly means of locomotion is what drives NAVYA, coupled with knowing that we have a model that works and which will continue to expand into many more countries. We thank Macnica, Inc. for the renewed confidence they have shown us by placing a further order and for signing into the future with us with their project to purchase the Navya Next Generation Platform.”

Since it was established in 1972, Macnica has provided leading-edge semiconductors, electronic devices, networks and cyber security products with high value-added technology. Macnica has been actively developing new businesses in the fields of AI, IoT, automated driving and robotics, based on its strength in global sourcing and strategic planning for world-leading technologies. With its slogan “Co.Tomorrowing”, Macnica connects leading-edge technologies with ‘Macnica’ intelligence to provide unique services and solutions, creating social value and contributing to the betterment of future societies. Headquartered in Yokohama, Macnica’s global business spans 23 countries and 85 locations worldwide.
www.macnica.co.jp/
Contact MACNICA, Inc .PR : macpr@macnica.co.jp

Created in 2014, NAVYA is a leading French name specialized in the supply of autonomous mobility systems and associated services. With 280 employees in France (Paris and Lyon), in the United States (Michigan) and in Singapore, NAVYA aims at becoming the leading player in Level 4 autonomous mobility systems for passenger and goods transport. Since 2015, NAVYA has been the first to market and put into service autonomous mobility solutions. The Autonom® Shuttle, main development axis, is dedicated to passenger transport. Since its launch, more than 200 units have been sold in 25 countries as of 31 December 2021. The Autonom® Tract is designed to goods transport. Engaged in an ambitious CSR approach, the Company has an active policy in this area, as illustrated by the obtaining of the ISO 9001 certification in September 2021. The Valeo and Keolis groups are among NAVYA’s historical shareholders.
NAVYA is listed on the Euronext regulated market in Paris (ISIN code: FR0013018041- Navya).
Further details: www.navya.tech