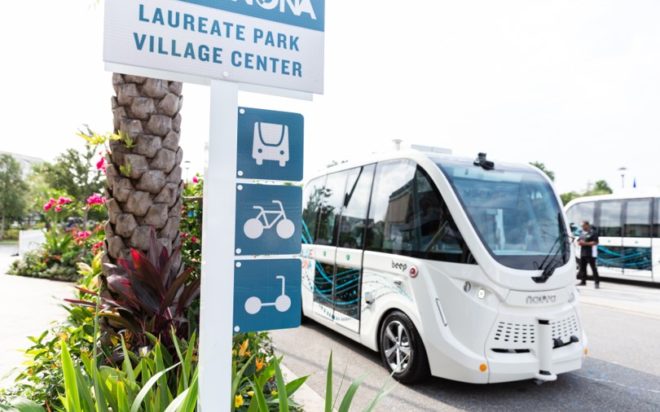 The ITS World Congress Hall of Fame Local Government Award is given to a government agency that develops and/or deploys significant innovative ITS products or services that fostered advanced deployment of ITS services, implements policies or projects advancing the development and deployment of ITS and plays a leading role in the ITS Community.

From March until July 2020, the JTA’s Automation & Innovation Division worked with Beep and NAVYA to deploy autonomous vehicles on the Mayo Clinic’s Jacksonville campus to move successfully more than 30,000 COVID-19 and BAP test samples from drive-thru testing sites to the hospital’s laboratories. In concert with the JTA and Mayo Clinic, Beep enabled multiple NAVYA vehicles end-to-end along the roughly 0.5-mile route on the Mayo Clinic campus. The Autonom® Shuttles operated with Level 4 autonomy, without on-board attendants.

NAVYA has grown in the U.S. since 2019 thanks to different deployments including JTA, Lake Nona, Tampa, St. Petersburgh and Port St. Lucie. The strategic partnership built with Beep started with the deployment of two shuttles in Lake Nona (Orlando), FL, which has expanded to become the largest and longest single AV network in the United States of America.

As of today, 6 Autonom® Shuttles operate seven days a week across five routes in the community on public roads. All routes connect the key destinations within the 17-mile master planned community such as the Town Center, recreational area, Orlando VA Medical Center, Nemours Children’s Hospital and Ronald McDonald House to Lake Nona residential areas. Two years after its launch, the Autonom® Shuttles have driven over 21,000 miles, had ridership of more than 30,000+ passengers, reduced the equivalent of 16,800 vehicle trips, and saved thousands of pounds of CO2 with the 100% electric autonomous shuttles.

NAVYA and Beep have already several new vehicle launches together, as the one deployed early October 2021 in the Innovation Corridor at Peachtree Corners, Georgia, and two upcoming in Tampa, Florida and Peoria, Arizona.

” We congratulate JTA on winning ITS World Congress Hall of Fame Local Government Award using Navya Autonom® Shuttles. Our focus is to be number one supplier in the United States of self-driving solutions to serve customers like Beep”.

Will Sosson, Director of NAVYA, Inc. in North America

“NAVYA’S safe and reliable self-driving technology proved the feasibility and viability of fully autonomous vehicles, with no attendant onboard, to help facilitate the safe transport of COVID-19 test supplies. The safe testing of autonomous shuttles on public roads can only be accomplished through collaboration and working with the best of breed platforms in the industry”.

“We would like to thank Beep for its trust and all the achievements our partnership delivered during these two years. The deployments such as the ones operated on the Mayo Clinic and Lake Nona illustrate all the benefits provided by alternative mobility solutions. With these experiments, NAVYA technology proved to deliver an easy, safe and sustainable service, able to decrease the number of vehicle trips while reducing the carbon footprint within a 100% electric solution”.

About the Jacksonville Transportation Authority (JTA)

Created in 2014, NAVYA is a leading French name specialized in the supply of autonomous mobility systems and associated services. With 280 employees in France (Paris and Lyon), in the United States (Michigan) and in Singapore, NAVYA aims at becoming the leading player in level 4 autonomous mobility systems for passenger and goods transport. Since 2015, NAVYA has been the first to market and put into service autonomous mobility solutions. The Autonom® Shuttle, main development axis, is dedicated to passenger transport. Since its launch, more than 180 units have been sold in 23 countries as of 31 December 2020. The Autonom® Tract is designed to goods transport. Engaged in an ambitious CSR approach, the Company has an active policy in this area, as illustrated by the obtaining of the ISO 9001 certification in September 2021. The Valeo and Keolis groups are among NAVYA’s historical shareholders.
NAVYA is listed on the Euronext regulated market in Paris (ISIN code: FR0013018041- Navya).
For more information visit: www.navya.tech/en