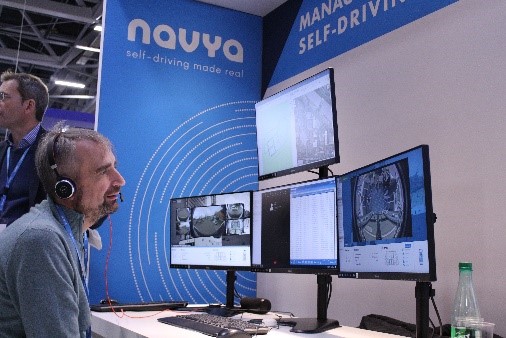 Villeurbanne, France, March 21st, 2022 – 7h30 CET – NAVYA (FR0013018041- Navya), a leading company in autonomous mobility systems, presented a fleet of self-driving shuttles operated by remote supervision at the Autonomy mobility show, which was held in Paris on March 16th and 17th. NAVYA took the opportunity to transform its booth into a genuine control center where visitors had a ring-side view of four driverless shuttles being shepherded remotely in real-life conditions on two different sites. While the operator carried out various control and monitoring tasks, Olivier Le Cornec, NAVYA’s Technical Chief Officer gave a running commentary of each situation that was transmitted live onto a big screen.

Manage, monitor, secure and anticipate were the catchwords that demonstrated NAVYA’s holistic answer to a series of critical situations: an obstacle on the road, an absent-minded pedestrian in the lane, a passenger feeling ill, fire on the route, to name but a few. Eleven simulated scenarios from a large range of potential events were projected onto the screen, to which NAVYA reacted and responded, guaranteeing the safety of both the passengers and other road users on each occasion.

As a recognized Level 4 global player, NAVYA also took the opportunity to host a round-table discussion with a number of high-level speakers on its vision for Level 4 and related ecosystems, where the challenges facing driverless autonomous mobility were aired and the solutions debated.

“At the Autonomy Paris 2022 we attended the demonstration by our partner NAVYA which, as operator of autonomous mobility systems, opened a new stage toward future pilot services. The solution we saw today proves that the operator will play a part in the networking of several self-driving shuttles, thus checking one more box in the remote safety process which is leading us toward Level 4 autonomy. It’s gratifying to see NAVYA reaching this new stage successfully, and it will also benefit our ecosystem.”

“Navya demonstrated its skills with the remote shepherding of a fleet of fully autonomous vehicles.”

“I was happy to be updated on and appreciate the technological expertise and knowledge of NAVYA in the supervision system of automated driving fleet.”

“With the integration of remote supervision, NAVYA has demonstrated its systems expertise, serving to illustrate the skills and technological edge which its engineers have brought to the design and development of a hypervision, embracing connectivity, command and control, data science, machine learning and video streaming on demand and in real time. During the demonstration our driverless shuttles covered 1,000 km where every move was under constant control, which goes to show the level of maturity NAVYA has achieved in the field of shared, autonomous mobility.”

“The methodology and technological experience we have acquired by working closely with our customers have enabled us to transform mobility concepts into industrial and operational solutions on a large scale. Shepherding is the cornerstone of autonomous mobility, creating optimal safety operating conditions. Our mastership of remote supervision was demonstrated live at our booth before an audience of 1,000 attendees. It represents a decisive stage in the deployment of autonomous mobility for the benefit of greater numbers of people. NAVYA is ready to launch Level 4 on the market with a competitive turn-key offer from both a technological and economic and ecological point of view, while global demand is continually growing.”

“NAVYA’s demonstration represents an important milestone in the field of autonomous mobility, shaping the years to come and opening the way to numerous international opportunities. NAVYA has clearly succeeded in achieving its vision of reaching Level 4.”

Video of NAVYA’s shepherding demonstration: Watch the video on YouTube

Created in 2014, NAVYA is a leading French name specialized in the supply of autonomous mobility systems and associated services. With 280 employees in France (Paris and Lyon), in the United States (Michigan) and in Singapore, NAVYA aims at becoming the leading player in Level 4 autonomous mobility systems for passenger and goods transport. Since 2015, NAVYA has been the first to market and put into service autonomous mobility solutions. The Autonom® Shuttle, main development axis, is dedicated to passenger transport. Since its launch, more than 200 units have been sold in 25 countries as of 31 December 2021. The Autonom® Tract is designed to goods transport. Engaged in an ambitious CSR approach, the Company has an active policy in this area, as illustrated by the obtaining of the ISO 9001 certification in September 2021. The Valeo and Keolis groups are among NAVYA’s historical shareholders. NAVYA is listed on the Euronext regulated market in Paris (ISIN code: FR0013018041- Navya).
For more information visit : www.navya.tech