Autonomous transportation: a response to the challenges of urban mobility and climate change in Asia 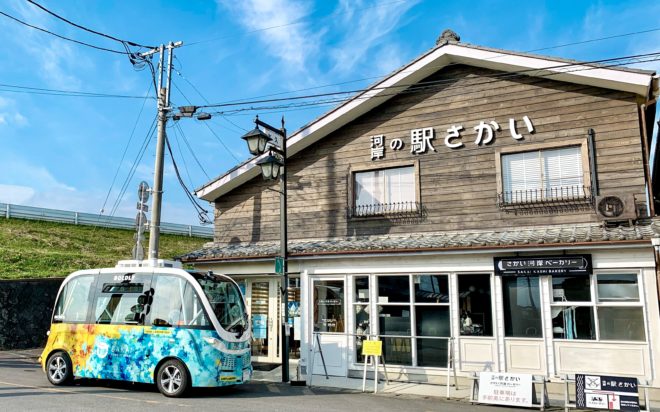 Villeurbanne, France, Mai 25th 2022 – 07:30 CEST – NAVYA (FR0013018041- Navya), an autonomous mobility systems leader, consolidates its position in Asia by participating year on year  to the continent’s quest for mobility as a service that is ever more autonomous, connected, inclusive and sustainable.

In the face of the challenges of an aging population and a declining workforce, especially in particular district local towns Japan is banking on autonomous mobility as a future solution for shared and environmentally friendly transportation. Boldly and Macnica, two of Navya partners that are committed to the transition toward autonomous mobility for the benefit of all, have been conducting a multitude of trials to demonstrate the advantage of its shuttles.

Our shuttles have been deployed in more than a hundred use cases (e.g. 117 times of POC has delivered by Boldly, as of May 2022) in particularly complex environments. Here is few key projects that Navya and our partners have successfully implemented as commercial operation since 2018.

In the run-up to the Expo 2025 Osaka, Kansai, Japan, Boldly is conducting a trial in partnership with the Osaka Municipal High Speed Electric Railway and others to promote the shepherding of a fleet of several shuttles via an API link. This latest step in the field of autonomous mobility will enable a large number of visitors to Expo 2025 to move around the exhibition’s site in driverless vehicles.

Boldly manages the operation of shuttles in Sakai-Machi using the platform called ‘Dispatcher’, which can manage and monitor the operation of multiple shuttles at the same time from a remote supervision center which has been established inside the Sakai-Machi Sympathy Hall, operating by usually 1 remote supervisor on a daily basis by Operating Company called ‘SENEC’. Dispatcher integrates automatic driving status monitoring, emergency response, vehicle inspection, driving instruction function, etc., and can be used for safe operation management.

Navya at the heart of IOT in Korea

Spring Cloud Co., Ltd., a leading startup company founded in 2017 is one of Navya’s partners in Korea. Spring Cloud is the first private company in Korea to obtain temporary operation permit for autonomous driving vehicles, and develop autonomous driving operation and shuttle service business and technology with Navya since 2018. Besides, Spring Cloud is the first in Korea to pass a regulatory sandbox to receive the first permission for an unmanned shuttle in Korea.

Currently, Spring Cloud and Navya are providing operational services with 7 shuttles in Sejong-city, Daegu-city, Gunsan-city as well as other verification services such as Sangam-Dong and Seoul National University of Science and Technology, etc.. In addition, Spring Cloud and Navya are expanding service area nationwide by working with the Postal Service Headquarters on a 5G/AI-based autonomous mobile post office and delivery robot project through Autonom® Shuttles of Navya.

Spring Cloud Co., Ltd recently immersed Navya’s shuttle passengers into the metaverse by offering a unique virtual reality experience during their ride. The project was presented at the Yeosu Expo 2022 on March 25th, with the aim of offering ever more technologies and innovations for the comfort and the well-being of passengers, while providing new autonomous mobility opportunities for an ever more connected and attractive user experience.

First trial of a NAVYA shuttle in Indonesia

Indonesia is showing its commitment to the transition toward smart, green cities by deploying an autonomous driving pilot project in collaboration with the Mitsubishi Corporation and Macnica Joint-venture and the Japan International Cooperation Agency. A Navya shuttle will operate for a period of one year in Bumi Serpong Damai (BSD) city, located in Tangerang, Banten. BSD is a smart city being home to the Apple Developer Academy, co-run by Apple and several local Indonesian universities.

The Navya shuttle will operate in the Q Big BSD City and the BSD Green Office Park with the aim of facilitating the mobility and enhancing the quality of life of a large number of residents, working people, and visitors, by offering them a service which is safe and environmentally friendly.

During the ceremony which was held on May 20th, Budi Karya Sumadi, the Indonesian Minister of Transport, officially launched the first journey of the Navya shuttle and demonstrated his enthusiasm for the project to the invited audience and journalists with the following speech: “Thank you Sinar Mas Land and Mitsubishi Corporation that have prepared this project as a good innovation for us. The presence of autonomous electric vehicles offers a solution that is low on carbon emissions, reduces congestion, and runs on time. I hope that we can bring this technology to the G20 Summit so the world will see Indonesia is hosting a breakingthough toward the future. I support BSD City to be an innovation lab, setting an example for other developments and emboding the vision of our president.” (source : Jakarta Daily)

Opening ceremony for the first NAVYA shuttle in Indonesia

The government of Singapore actively supports the development of autonomous transportation and has initiated a number of projects to improve the fluidity of traffic on its roads and to limit the use of private cars to a minimum. Ranked first on the KPMG Autonomous Vehicles readiness Index, Singapore is a strategic place for the development and real-life testing of Autonomous driving solutions.

NAVYA has built on its partnership with ST Engineering Autonomous Solutions (STEAS), a subsidiary of ST Engineering, a global technology, defence, engineering group, to deploy its shuttles widely, in particular in touristic areas, and on military bases.

Navya has created in 2021 a subsidiary in Singapore, Navya Systems, with a dedicated team to manage deployments, maintenance and training, with a dual objective: guaranteeing a very high quality of service to Asian customers, and accelerating the transfer of skills to St Engineering, our local partner.

This subsidiary is also intended to carry out technological development initiatives specific to the region and the demands of its clients (private cloud infrastructure, solutions for high-security sites, V2X, etc.).

Thanks to the involvement of ST Engineering and Navya’s teams, a number of trials and operations are ongoing at the moment in Singapore :

Along with commercial public operations above, multiple projects have been deployed on Military sites, structuring Navya’s activities in the country.

The Singapore Armed Forces (SAF) is trialling the use of autonomous platforms to transport logistical supplies and personnel in military camps. Autonomous shuttles trials have been ongoing in multiple military sites, including Kranji Camps, and Paya Lebar Air Base, since April 2021.

The Singapore Army and the Republic of Singapore Air Force (RSAF) are collaborating with the Defence Science and Technology Agency (DSTA), and ST Engineering, to leverage Navya’s AV technologies to develop further for logistics and people transportation operations.

Hong Kong government has released Smart City Blueprint 2.0 in December 2020, with an increased emphasize and investments on smart mobility initiatives, namely by facilitating the trials and use of autonomous vehicles in suitable places, such as airport or other type of restricted sites. Navya continues its presence and effort in Hong Kong, viewing the importance and potential of this growing market in smart mobility

Launched in October 2015, the first Navya shuttle in Hong Kong has been deployed at the Nursery Park of the West Kowloon Cultural District Authority (WKCDA) with the aim of providing barrier-free access and facilities for people in need. The introduction of the Navya shuttle allows to enhance street-level pedestrian connectivity within the District and encourage more members of the community to step into the world of art and culture.

“ Autonomous transportation is developing throughout the world and sets the stage for a new type of multimodal mobility as a service to the passenger and the environment. While the world has committed to far-reaching transitions toward more responsible and inclusive mobility, each country is advancing at its own rhythm according to its particular road map. NAVYA works hand-in-hand with each of them at every stage of development, adapting to their needs and challenges to deploy successful solutions that are sustainable over time. Our trials in Asia are providing answers for last mile transportation that are efficient and hailed unanimously by our partners and users. Pilot projects are the indispensable starting point that leads to deployment on a larger scale, and we are pleased to collaborate with our partners in Asia, who are doing an outstanding job of putting down NAVYA’s roots in their respective zones and of positioning us for when the time is ripe for mass deployment ”.

NAVYA is a leading French company that specializes in the supply of autonomous mobility systems and related services. It was founded in 2014 and has a total of 280 employees in France (Paris and Lyon), in the United States (Michigan) and in Singapore. NAVYA’s aim is to become the benchmark provider of level 4 autonomous mobility systems for the transportation of people and goods. The company achieved a world first when it launched its Autonom® Shuttle for passengers in 2015. Since that year and up until 31 December 2021, more than 200 vehicles were sold in 25 countries. In 2021 Navya launched its industry equivalent, the Autonom® Tract, a tractor for the transportation of goods. The company is firmly and actively committed to CSR, and it was awarded the ISO 9001 certification in September 2021. The Valeo and Keolis groups count among Navya’s historical shareholders.