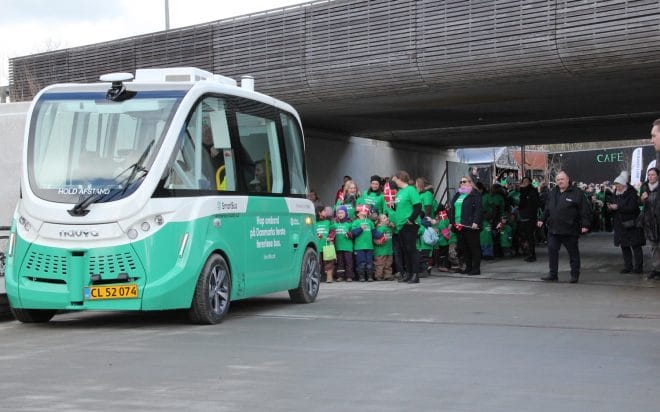 Today, the Danish Minister of Transport Benny Engelbrecht officially inaugurated the first autonomous bus service in Denmark, in the suburb of Aalborg East in Denmark.

Is it possible to transform a divided housing area to a socially sustainable and connected living space with autonomous shuttle buses?

A new pilot project initiated by Aalborg Municipality has high ambitions to do just that. The pilot project called SmartBus aims to increase mobility among the residents (of whom less than 50% have access to a car) and bring the neighbourhood closer together. Today the project was officially launched.

With the inauguration of SmartBus, NAVYA has provided 3 AUTONOM® SHUTTLES for the daily operation in mixed traffic in Denmark. Two of these self-driving vehicles are operating simultaneously on the route every day from 7:00 AM to 9:00 PM in a pilot of two years.

The shuttle buses share a path with cyclists, while pedestrians have their own designated path. The 2.1 km route has ten stops which have been built into the path with wheelchair accessible platforms.

Experienced forces behind the autonomous operation

As the leading operator of autonomous vessels in Europe, Holo has been operating autonomous shuttle buses from NAVYA over more than 28,000 km in 5 countries. Having transported more than 40,000 passengers in the buses, the Danish company is happy to pick up riders in their home market, too:

“The residents of Aalborg East now have an accessible and easy way of moving around the area, and because of the long service hours, people will be able to use the bus most of their day. We are so excited to finally hit the road,” says Christian Bering, Director of Technology, Data and Operations at Holo.

“We are delighted to announce this first autonomous public road service in Denmark. It is the result of a long-standing partnership with Holo that paves the way for us in Denmark. Aalborg is an ideal environment to showcase the ways in which driverless vehicles integrate seamlessly in our daily lives and can serve as a model for other cities in Denmark,” explains Arnaud Rouault, VP Sales EMEA of NAVYA.

SmartBus is part of a larger urban development project in Aalborg East. The project helps to promote a sustainable development of the area.

Driving past a community center and library, a shopping center, as well as several housing areas and a care home for residents with dementia, the bus will be used by various types of residents across all ages and backgrounds.

The partners in the project hope that it will provide a sense of unity and local ownership surrounding the development of Aalborg East.