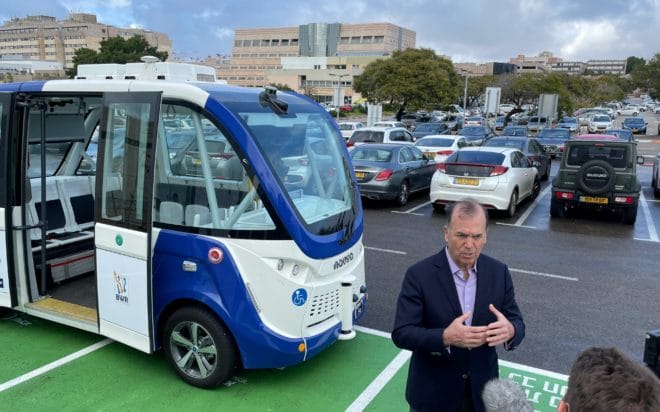 Sheba Medical Center, located in the suburbs of Tel Aviv, is the leading medical center in the Middle East and an internationally recognized healthcare facility[1]. From January 2021, an Autonom® Shuttle integrates with the Center’s existing Sheba Bus shuttle service to transport passengers around its campus. Part of the Smart Mobility Initiative under the Prime Minister’s Office, this pilot project is led by the Israel Innovation Authority (IIA) and the Israel Ministry of Transport, in cooperation with ST Engineering. This pilot project will be operated in collaboration with autonomous solutions startup Blue White Robotics (BWR). As part of this project, Navya is providing the autonomous driving systems as well as the electric shuttle and associated services. This is the 23rd country in which Navya is deploying its solutions.

A complex environment for an ambitious technological challenge

The route is a loop of about 2.1 km and serves the main hospital buildings (Ophthalmology Centre, Institute of Odontology, Pediatric Centre/children’s hospital, etc.), sharing the road with existing bus lines. The route is punctuated by 7 stations and welcomes any person on the hospital site (staff, patients, visitors, etc.). The shuttle operates in a very complex environment due to the presence of very dense and varied surrounding traffic (buses, taxis, cars, bicycles, motorbikes, other small motorized and slow vehicles of all kinds, etc.). On the route, the shuttle runs close to large car parks (resulting in a rather poor Lidar environment and therefore difficult to map), passes under several bridges and in the middle of tall buildings (limited GNSS coverage), and crosses 4 roundabouts and more than 20 pedestrian crossings.
These are the many challenges that are met and overcome by autonomous driving systems, whose technology is constantly evolving.

Future development prospects with further opportunities in the country

After this deployment, the service will be continued, and additional shuttles could join the site with potential future paths. Many other projects are under consideration in Israel, as the country is facing major transportation challenges such as heavy traffic congestion, traffic-related accidents, air pollution as well as their associated economic and health impact, public interest in autonomous shuttles is on the rise. The Ministry of Transport is promoting autonomous trials for various use cases for first/last mile.

“I am very pleased with this first public deployment in Israel, especially since our systems are implemented within a complex path. I am also delighted that our partnership with ST Engineering is being extended to Israel, which is a “start-up nation” always at the forefront of the latest technological innovations, with a strong potential”.

“This deployment is an important milestone for ST Engineering in the provision of autonomous mobility solutions. We are proud to partner Israel with whom we share a common vision for the future of urban mobility.”

Navya is a leading French name in the autonomous driving systems. With 280 employees in France (Paris and Lyon) and in the United States (Michigan), Navya aims at becoming the leading player for the supply of autonomous driving systems for passenger and goods transport. Since 2015, Navya has been the first to market and put into service autonomous mobility solutions. The Autonom® Shuttle, main development axis, was launched in September 2015 and nearly 170 units have been sold as of 30 June 2020, notably in the United States, France, Germany, Switzerland, Japan and Australia. The Autonom® Tract is dedicated to goods transport. Created in 2014 with the support of Robolution Capital, investment fund managed by 360 Capital Partners, his reference shareholder, Navya’s shareholders also include the Gravitation fund and Paris Region Venture Fund (Région Île-de-France) managed by Karista as well as Valeo and Keolis groups.
Navya is listed on the Euronext regulated market in Paris (ISIN code: FR0013018041- Navya).
For more information visit: www.navya.tech/en