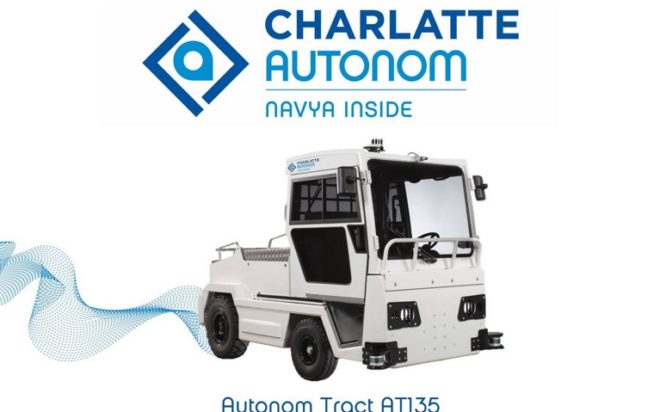 Villeurbanne, France, October 1st, 2018 – 6:00 pm CEST – NAVYA (FR0013018041- NAVYA), a leading company in autonomous vehicles and in smart and shared mobility solutions, and Charlatte Manutention, one of the world’s leading manufacturers of electric and combustionbased vehicles for industrial and airport applications, announce the creation of a subsidiary to develop autonomous tractor solutions, particularly for transporting baggage in airports.
The subsidiary will combine the acknowledged quality and performance of Charlatte Manutention’s T135 baggage tractor – the best-selling vehicle in its category, with more than 12,000 vehicles in operation worldwide – and NAVYA’s expertise in autonomous vehicles, to develop an autonomous and efficient solution for transporting baggage and freight from the airport building to the aircraft ramp.

The subsidiary, in which NAVYA owns a 51% stake, will manage the development, construction and maintenance of the vehicles. The prototype of the first tractor jointly developed by NAVYA and Charlatte Manutention – the AUTONOM TRACT AT135 – will be presented at the International Airport GSE Expo, an international trade fair dedicated to
airport ground support equipment taking place in Las Vegas between 2 and 4 October 2018.

“Through this partnership with NAVYA, Charlatte Manutention is building the future of the electric baggage tractors segment, in which it is the world leader. We are excited by the prospect of developing solutions at the leading edge of technology with a partner whose products and services are so innovative. The partnership fits perfectly with the Fayat group’s culture and strategy of innovation, with the aim of creating value with and for our customers and providing them with unique benefits.”

“We are delighted to be working with Charlatte Manutention, one of the world’s leading players in electric and combustion-based vehicles for industrial and airport applications, to develop a dedicated autonomous tractor offering and to capture the potential of this important market. This development is fully in line with our strategy of becoming a world leader in autonomous vehicles.”

Charlatte Manutention is part of the Fayat group and the world leader in electric baggage tractors. With 140 employees in France and the United States, the company generated revenue of €61 million in 2017/18.
The Fayat group was founded in France in 1957, and operates in 170 countries via 160 companies. With its 19,100 employees, it supports its customers all around the world with innovative and sustainable solutions for the construction market and in its seven core business areas: Public Works, Foundations, Building, Energy Services, Steel and Lifting Equipment, Pressure Vessels and Road Equipment. In 2017, the Group generated revenue of €3.7 billion.
Fayat is a world-leading specialist in road equipment, offering a comprehensive and highperformance range of products addressing each stage of the road life cycle.

NAVYA is a leading French name in the autonomous vehicle market and in smart shared mobility solutions.
With more than 200 employees in France (Paris and Lyon) and in the United States (Michigan), NAVYA develops, manufactures and commercializes autonomous, driverless, and electric vehicles that combine robotic, digital and driving technologies at the highest level.
Since 2015, NAVYA has been the first to market and put into service autonomous mobility solutions, shuttles and cabs. NAVYA has a range of two autonomous vehicles: the AUTONOM® SHUTTLE, launched in September 2015, of which more than 100 have already been produced as of today and 89 sold in 17 countries as of June 30, 2018, notably in the United States, France, Germany, Switzerland, Japan and Australia, and the AUTONOM® CAB, unveiled in November 2017 and whose first road tests will start shortly.
Created in 2014 by Christophe Sapet and Robolution Capital 1 (managed by 360 Capital Partners), his reference shareholder, NAVYA’s shareholders also include the Gravitation fund and Paris Region Venture Fund (Région Île-de-France) managed by Cap Decisif Management as well as Valeo and Keolis groups.
NAVYA is listed on the Euronext regulated market in Paris (ISIN code: FR0013018041- NAVYA).
For more information visit: www.navya.tech/en