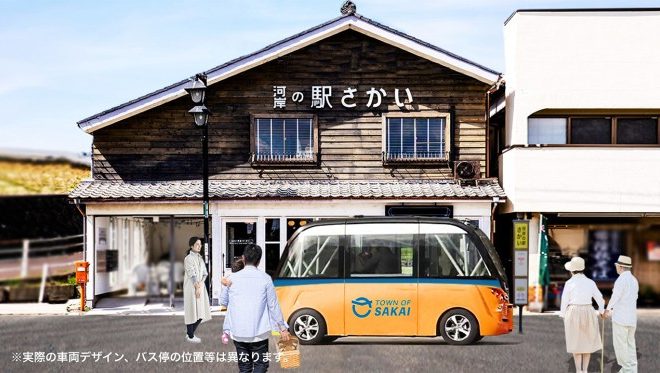 French know-how NAVYA has won over Japan with its autonomous shuttles, which will go into service in April 2020.

In April 2020, the city of Sakai will put autonomous electric shuttles into operation for the first time in Japan: NAVYA AUTONOM® SHUTTLE. To achieve this, the city has joined forces with the specialists SB Drive Co, Ltd., a subsidiary of SoftBank Corp dedicated to autonomous mobility, and Macnica Co., a Japanese electronics and digital solutions group, which will provide support in operations.

This is the very first autonomous shuttle service operating on public roads in Japan *.

The city of Sakai will use NAVYA’s AUTONOM® SHUTTLES and SB Drive’s Fleet Management System called “Dispatcher” which can simultaneously and remotely monitor the operation of several self-driving vehicles. The autonomous shuttles will begin to be operated by Macnica on routes that connect medical facilities, post offices, schools and the city’s banks.

We are delighted to be able to announce this first service only 6 months after obtaining the first permission to drive on public roads in Japan. It is the result of a longstanding partnership with SB Drive that paves the way for us in Japan.

This new autonomous mobility service is a response to the societal challenges facing the city of Sakai, and Japan in general. New forms of mobility are needed in the face of an ageing population and a shortage of bus and taxi drivers.

For a smater mobility

This tripartite partnership aim is to create an environment in which residents can move around easily by operating autonomous buses. Sakai, SB Drive and Macnica recently concluded a cooperation agreement to revitalize the region and industry, but also to improve the daily lives of residents through a new mobility service.

The secretariat of Japan’s Economic Revitalization Bureau recently reorganized the transportation facilities according to the environmental conditions of each region. As a result, businesses and local governments considering the use of autonomous vehicles can do so.

*This is the first time that a vehicle, with a capacity of 11 people or more, can be used independently for private individuals (according to a search by SB Drive).