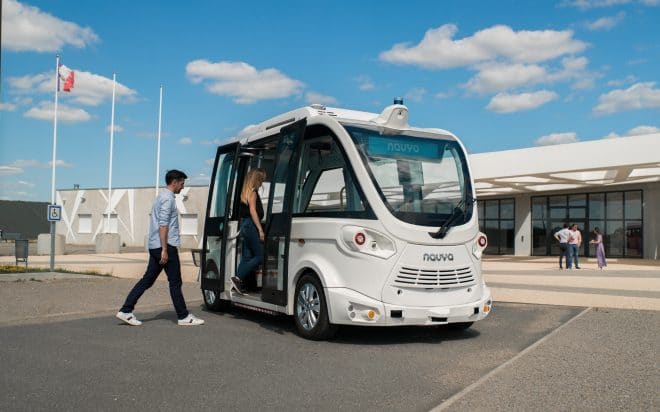 Villeurbanne, France, July, 09 2020 – 5 :45 pm CEST – Navya (FR0013018041- Navya), a leading company in autonomous driving systems, launches a level 4 fully autonomous shuttle service, meaning without a safety operator on board. This service has been launched progressively since June 22nd at the National Sport Shooting Centre (NSSC) in Châteauroux, France, in partnership with Keolis.

A decisive step towards a fully autonomous commercial offering

Since June 22nd 2020, the “Autonom® Shuttle Evo” shuttle has been circulating within the National Shooting Sport Centre allowing athletes and visitors to move from the car park to the reception area.
With a distance of 1.5 km, this route is carried out at a maximum speed of 18 km/hour.

This launch is a decisive step towards the development of a transport offering that integrates level 4 full autonomy vehicles (which corresponds to a real autonomy without a safety operator onboard). This service is carried out in complete safety for passengers and other road users.

Thanks to the continuous improvement of the “Navya Driver” autonomous driving software and the sensor architecture of the “Autonom Shuttle Evo”, the shuttle operates without a safety driver, in a determined environment and on a predefined route, with off-board supervision that can take control of the vehicle in real time, if necessary. The presence of other users (pedestrians, cyclists and other vehicles) on the site is regulated thanks to secure access and reduced driving speed.
In later stages of the experiment, the shuttle will be supervised from a remote control centre. The shuttle will operate on a route that includes a multi-lane road and intersections with connected traffic lights.

“The integration of this level 4 fully autonomous service operated by Keolis is an important step for Navya. We want to demonstrate that we are going to provide a truly autonomous transport service. This is the key to deliver on the promise of driverless and the business model associated. Indeed, even at controlled speed and in a controlled environment, there are countless commercial uses (industrial sites, campuses, tourist sites, etc.) that represent as many opportunities for our technology. In the coming months, we will focus on taking the steps that will enable us to commercialize these use cases.”

Click-here to access photos and videos of the “Autonom Shuttle Evo” shuttle in operation.

Navya is a leading French name in the autonomous driving systems. With 280 employees in France (Paris and Lyon) and in the United States (Michigan), Navya aims at becoming the leading player for the supply of autonomous driving systems for passenger and goods transport. Since 2015, Navya has been the first to market and put into service autonomous mobility solutions. The Autonom® Shuttle, main development axis, was launched in September 2015 and nearly 160 units have been sold as of 31 December 2019, notably in the United States, France, Germany, Switzerland, Japan and Australia. The Autonom® Tract is dedicated to goods transport. Created in 2014 with the support of Robolution Capital, investment fund managed by 360 Capital Partners, his reference shareholder, Navya’s shareholders also include the Gravitation fund and Paris Region Venture Fund (Région Île-de-France) managed by Cap Decisif Management as well as Valeo and Keolis groups. Navya is listed on the Euronext regulated market in Paris (ISIN code: FR0013018041- Navya)