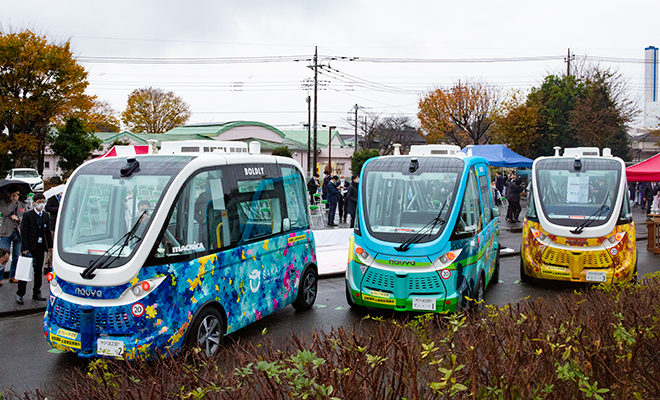 Villeurbanne, France, 19 January 2021 – 05:45 pm CET – Navya (FR0013018041- Navya), a leading company in autonomous driving systems, strengthens its partnership with Macnica, Inc. and continues its development in Japan.
Navya has identified Japan as a high-potential market: the shortage of drivers[1] combined with increased transportation needs, particularly for the elderly[2], and a strong appetite for technological innovations make the solutions developed by the Company attractive.
Macnica, Inc. will showcase Navya solutions at Automotive World, which begins January 20 in Tokyo. The Autonom® Shuttle Evo, the latest-generation shuttle, will be exhibited for the first time in Japan at Macnica’s booth, accessible from the South Zone, No. S12-20.

Since May 2017, Navya is working with BOLDLY (ex. SB Drive Co., SoftBank’s subsidiary dedicated to autonomous mobility), its preferred partner in charge of deployment and supervision services. As such, BOLDLY has acquired solid expertise and has carried out overall more than 50 deployments, transporting more than 23,000 passengers in the country.
During the second half of 2020, several Autonom® Shuttles have notably been deployed at the following sites:

[1] The first time that a vehicle with a capacity of 11 or more people can be used independently for private individuals.

“We believe that the solution proposed by Navya will address the challenges currently facing Japan, such as the shortage of drivers. We expect Navya to be a major player in the field of Level 4 autonomous mobility.”

Transfer of exclusive distribution in Japan by ESMO Corporation to Macnica, Inc. and sale of 4 ORNANE

Macnica, Inc, an international electronics and digital solutions group, with a turnover of around 5.2 billion dollars and 3,500 employees worldwide, is the exclusive distributor of Navya in Japan, and is also in charge of operational support (maintenance activity).
Macnica and Navya share a common vision of autonomous passenger mobility to jointly transform the transport system in the coming years and meet the major challenges of Japanese society.
In February 2020, ESMO Corporation transferred 4 ORNANE (Bonds repayable in cash and/or new and/or existing shares) to Macnica, Inc. for an amount of €4 million. This transfer reflects Macnica, Inc.’s confidence in Navya’s technology and know-how, placing their partnership in a long-term perspective.

“We are very satisfied with our collaboration with Navya, which began in February 2020 and which is gradually being strengthened thanks to the experiments currently underway in Japan. We are convinced that our technological and financial partnerships with Navya will enable us to accelerate the deployment of autonomous vehicles on the Asian market”.

“ Following the strong partnerships built in South Korea and Singapore, Navya is gradually becoming the leading partner in Japan for the supply of level 4 autonomous driving systems. The business momentum recorded in the second half of 2020, the strengthening of our collaboration with Macnica. Inc. are evidence of Navya’s ramp-up and are the basis for long-term development in this region”.

Navya is a leading French name in the autonomous driving systems. With 280 employees in France (Paris and Lyon) and in the United States (Michigan), Navya aims at becoming the leading player for the supply of autonomous driving systems for passenger and goods transport. Since 2015, Navya has been the first to market and put into service autonomous mobility solutions. The Autonom® Shuttle, main development axis, was launched in September 2015 and nearly 170 units have been sold as of 30 June 2020, notably in the United States, France, Germany, Switzerland, Japan and Australia. The Autonom® Tract is dedicated to goods transport. Created in 2014 with the support of Robolution Capital, investment fund managed by 360 Capital Partners, his reference shareholder, Navya’s shareholders also include the Gravitation fund and Paris Region Venture Fund (Région Île-de-France) managed by Karista as well as Valeo and Keolis groups.
Navya is listed on the Euronext regulated market in Paris (ISIN code: FR0013018041- Navya).
For more information visit: www.navya.tech/en